I’ve been blessed with some pretty terrific relatives.  (And a few that are not so terrific, but I digress.)  High on my list of super-grandmothers is my Dad’s mother, Susan Raifsnyder Shirey.  Her grandchildren called her Mimi.

Mimi was born on Dec. 21, 1894 in Clarion County, PA. to David Whitehill Raifsnyder and Iola Blanche Jones. The family moved to Jenks Township in Forest County, PA. when she was two years old. She was the oldest of five living children and was the first person in her family to go to college.  She graduated from Clarion State Normal School in 1914 and taught elementary school in Forest County, PA. for several years. When she married Leland D. Shirey in 1917, school board rules said she had to quit teaching.  But, having eight children born in 17 years, kept her pretty busy raising children, running a household, gardening, and canning vegetables.  But, she still found time to write poetry and short stories and to write letters to editors of newspapers and politicians.

But, as she got older, I like to think her 27 grandchildren kept her young.  She had a vivid imagination and a wealth of knowledge.  Did you want to know about the flowers growing in her garden?  She could tell you each of them and all the legends and folklore that came with that particular flower.  In the mood for a ghost story?  She could tell a bunch of old spooky stories.

Most of the older grandchildren knew about a special place on the farm called Mimi’s Island. At least once every summer, when we got to her house, she would ask if we would like to go on a picnic to the island. Mimi would pack a lunch, and off we would go, walking behind the farmhouse, down past the outhouse and eventually, after taking off our shoes and socks,  wading across a big river to Mimi’s Island. We would explore the island, moving aside the undergrowth, not sure of what could be on the other side.  Sometimes we brought books to read or she would bring along a book to read to us as we sat on a blanket eating our lunch.  Some of us were fortunate enough to be introduced to classical literature as children while visiting Mimi’s Island.

It wasn’t until years later, when I was an adult and Mimi was gone, that I went looking for Mimi’s Island again.  I walked behind the old farmhouse, down past the outhouse and then l came – not to a river, but to a wee little stream that I now could easily step across – onto Mimi’s Island.  It’s amazing how children’s imaginations can grow with a good teacher.

We are in Virginia, spending a few days with our daughter and son-in-law and their new baby. At eight weeks old, baby Louisa Jane keeps us all enthralled, without saying a word! Holding her this afternoon, made me think about my grandmother, Louella Fasenmyer Carson. Baptized Louise Elizabeth and nicknamed Louella, she was born on Nov 28, 1898 in Fryburg, Clarion County, Pa. She was the 5th of 10 children born to Jacob Fasenmyer, a farmer, and his wife, Agnes Bauer. On Sept. 9, 1920, she married Clyde W. Carson in Oil City, PA. and they had four children: Pearl, Clyde, Virginia and Joan, who died of a heart ailment when she was just four and a half years old.

Louella was a feisty, funny, outspoken German grandma.  She kept her grandchildren busy with household chores, either scrubbing her front porch with a big mop or her kitchen floor on their hands and knees.  She was definitely a firm believer of “busy hands are happy hands.”  It wasn’t until her grandchildren were grown and started comparing stories, that many of us learned that we had re-scrubbed a porch someone else had already cleaned on the same weekend!

It was fun watching Grandma Louella and her sisters make thick doughy noodles in her kitchen and hang them to dry on a wooden rack, all the while conversing in German.  I remember being fascinated as she washed her lace curtains and dried them by stretching them on a wooden frame.  The frame had tacks on them and she used them to  attach the curtains to the frame. But, she wasn’t all work.  She loved her afternoon “stories” on TV and we all knew not to call her between noon and 3 p.m.  A favorite treat for those of us who lived close was going to her house in the evening to play canasta and to eat newly-baked sugar cookies.

Louella Fasenmyer Carson died on March 12, 1975. But, I think she would have enjoyed seeing this new great, great granddaughter.
This picture of Louella was taken around 1917, when she was 18 years old. 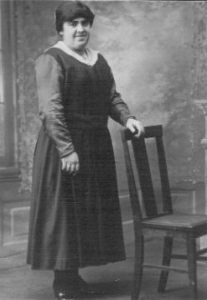 This Jane Austen blog brings Jane Austen, her novels, and the Regency Period alive through food, dress, social customs, and other 19th C. historical details related to this topic.

Thoughts on books, reading, and life

A blog of the U.S. National Archives

Stuff That Needs To Be Said

Genealogy, the law and so much more

Discovering Your Ancestors - One Gene at a Time

Worthy To Bear The Dignity Of Ones Ancestors

Center of the Plate | D'Artagnan Blog
Hound on the Hunt

Don't Bark Up The Wrong Tree

Stumbling Through the Past

The past is not perfect

To Write Is To Dream

Between the pages of a book is where I'd rather be.